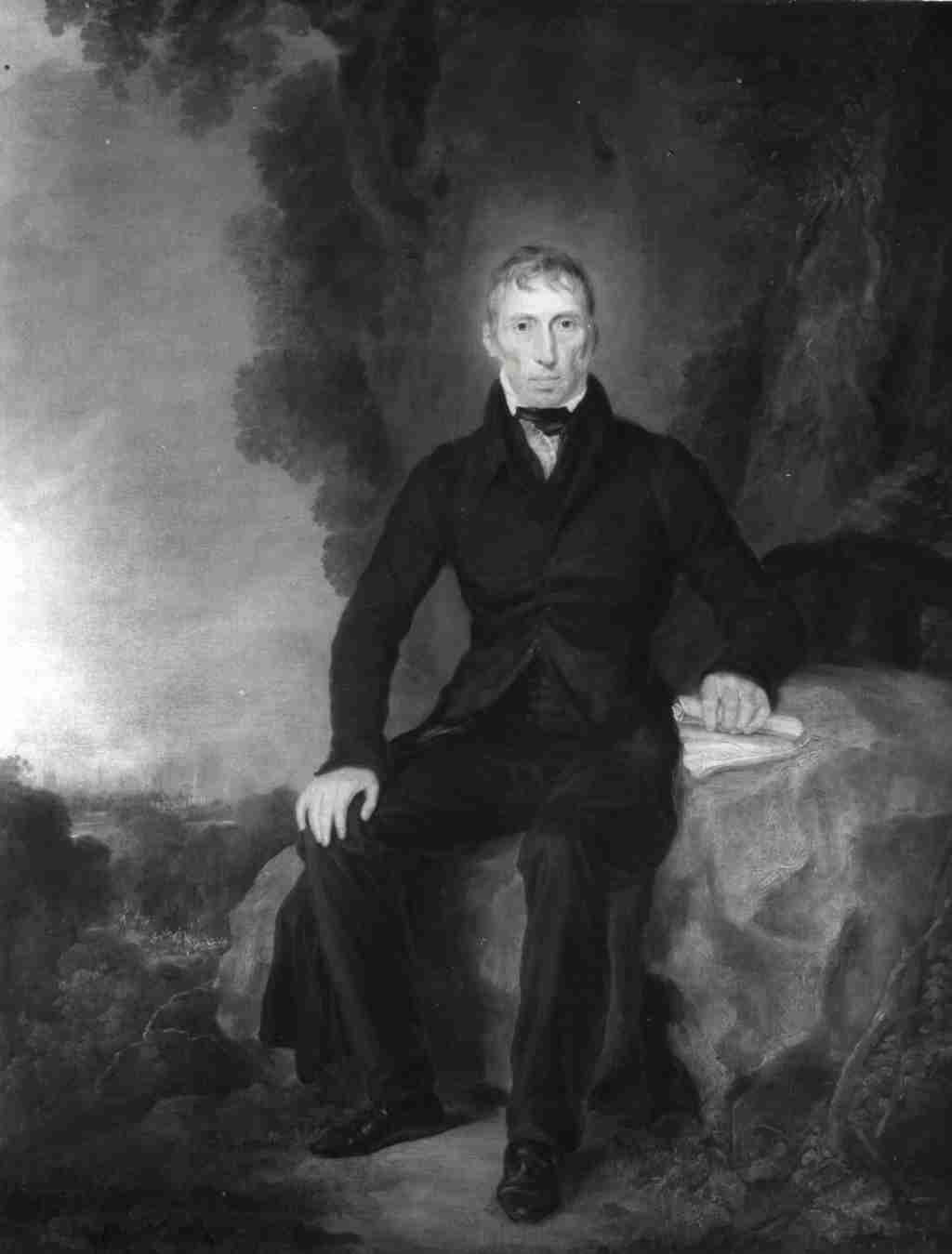 John Loudon McAdam was the son of James McAdam and Susanna Cochrane, the niece of the 7'th
Earl of Dundonald. John Loudon was the youngest of 10 children, but the only surviving male from
the main line of the Waterhead family. His older brother, James was a Capt. in the military and died
in the South Seas when John was about 7 or 8 years old.

John Loudon McAdam was born in Ayr, Scotland in Lady Cathcart's house in the Sandgate, on
September 21, 1756. The McAdam of Waterhead's residence at that time was Lord Carthcart's house
in Ayr until 1760 when the family built a new residence and moved to Lagwyne. The Lagwyne Castle,
now in ruins, is located on the outskirts of Carspairn, Scotland and was part of the property on the
Waterhead estate. James McAdam had moved the family residence from Waterhead to Lagwyne because
it was more accessible.

Shortly after the family moved into the new residence at Lagwyne it burnt to the ground. James and
Susanna were away on business in Edinburgh when the Castle burnt down. A fire from the fireplace is
said to have started the fire. John Loudon narrowly escaped the fire only to be rescued by the family
nurse. James McAdam did not rebuild the Lagwyne Castle and moved the family to Blairquhan or
sometimes called the Whitefoord Castle, near Straiton. He leased the Castle from Sir John Whiteford.
Whitefoord Castle since has been demolished and replaced by the present Blaiquhan Castle.

James' life style and the mismanagement of his business dealing set him back with many financial losses.
His financial empire collapsed with the Bank of Ayr, which he had co-founded. These financial setbacks
forced James to sell the ancient family Waterhead estate. Title to the estate is not clear, but Waterhead
ended up being owned by John McAdam of Grimmit who purchased it 21 January 1778.

John Loudon attended Mr. Doick's school at Maybole. When John was 14 years of age, in 1770, his
father, James died and was buried in the old kirkyard of Straiton. John Loudon was packed off to New
York in the care of his uncle, William MacAdam, a New York merchant and his wife, Ann, daughter of
Dirch Dey of New York who had no children. He owned McAdam & Co. who was granted 30,000 acres
of land in Middlesex known as the Kilby Grant.

John Loudon McAdam also became a merchant and his business prospered from Boston to Charleston.
He was co-owner with Robert Gilmore of Northfork, Virginia of the ship, "General Matthew". This
Privateer ship was engaged at the battle of Savannah Harbor, Ft. Sullivan, and at Charleston, South
Carolina where it was heavily damaged by the American Forces. John and his uncle, William helped
found the New York Chamber of Commerce in New York. William was a member of the "Committee
of Correspondence of 51". Membership included Samuel Adams and Paul Revere.

John married Gloriana Nicoll. She was the daughter of William Nicoll of Suffolk, New York, descended
from Colonel Nicoll. John and Gloriana inherited 1/3 of West Neck on Shelter Island and Blue Point Islip.
When the Revolutionary War came, John along with the other McAdames in New York City adhered to
the loyalist side in the Revolution. His uncle, Gilbert, later know as Gilbert McAdams of Merkland, was
"aide to Camp" to Richard Maitland, Adjutant General of the British forces in America. Richard Maitland
later married Mary McAdam, sister of Gilbert and aunt to John.

John Loudon served in the British reserves and was a government contractor engaged in the sale of war
prizes arising out of the War. After the war, John and his family were no longer welcome in America and
he returned to Scotland in 1783 with his wife and two children. His property and most of his other assets
were confiscated by the new American government. However, he managed to keep enough money to
purchase an estate, Sauchrie near Maybole.

Life Back in the UK

John's association with Admiral Lord Cochrane and the 9 th Earl of Dundonald acquired him controlling
interest in the iron works and mills that manufactured coal products such as tar for sealing sailing ships.
His major business associate was Admiral Keith Stewart. The adoption of copper for sheathing vessels
lead to a diminution in the use of tar for marine purposes and consequently the industry established by
Lord Dundonald, which John Loudon had a major investment in, began to decline and eventually ceased
to function.

During this period, John's first known efforts in road building took place when he carried out some
experiments with road stones. He constructed a road leading from the Alloway-Maybole highway to
his estate. The road eventually became the highway and was still in use in 1936. Here he experimented
with various road making techniques, but for 15 years he was Deputy-Lieutenant for Ayrshire. It was
not until 1787 that he became a Road Trustee.

In 1794, John was a major in a corps of artillery. He was proud of his commission that was one of the
last actually signed by King George lll. In 1798, he received a Government appointment at the beginning
of the Napoleonic War as agent for the revictualling of the Navy at the western ports. This appointment
took him to Falmouth, England. In 1801 his acceptance of the post of surveyor to the Bristol turnpike
trustees launched on the great work of his life. He was then 45 years of age. In 1818, he was acting as
consulting surveyor to no fewer than 34 Road Trusts.

His 3 sons, one by one gave up their own careers in Scotland, in each case at some financial sacrifice and
moved to England to help their father. John's work was held in such high regard that a Parliamentary
Committee, reporting in 1819, was unstilted in their praise of him and the efficiency and economy of
his method of road maintenance. By the year 1823, the number of Road Trusts consulting McAdam had
risen to nearly seventy. Thirty-four of which were actually managed by the McAdam family. Quinton
McAdam of Craigengillan, Quinton McAdam of Waterside, and Alexander McAdam of Grimmet, all John
Loudon's cousins are found on the Trustee's list.

John held valid patents on his method of road building that he had developed, undertaken, and built at
his own expense. His methods proved so important that his patents were not protected and enforced
by the governments, even in England. The term "Macadamized Road" long since has died out. Only the
term "Tar-Mac", short for Tar-Macadam used to describe airport runways remains.

Parliament eventually awarded John some payment, but he was never completely compensated for his
work or received royalties. Towards the end of his life John was offered knighthood for his work. He
turned down the honor due to his age, but passed on the honor to his son. John, against the wishes of
his family, had a second marriage to Charlotte, sister of Bishop de Lancy. He died on Nov. 26, 1836 at
Moffat and was buried there next to his grandmother's grave.

John's grandfather was James McAdam who married Margaret Reid late in life. When James died, his
widow went to live at Dumcrieff, a beautiful place just outside Moffat, Scotland. There she married
again a Dr. Johnstone who died in 1766. Georgina, a great granddaughter, wrote she was a very stately
woman and never gave up her title of "Lady Waterhead".

Link to Maybole, Scotland the home of John Loudon McAdam at Sauchrie, Scotland John is listed under noteable minnieboles. www.maybole.org

I have spent a lot of time on McAdam papers both in the National Archives of Scotland and in Ayrshire Archives in recent years and have extensive research notes. I hope that something will be published one day on McAdam in Ayrshire, principally but not exclusively concerning the period after his return from America.
I have listed the points I would question in the biographical sketch on our website.
He was born on 23rd September 1756 (not the 21st, as also shown in the Dictionary of National Biography and the Encyclopaedia Brittanica- John Loudon McAdam's Bilble states his birth date is 21st).

There is no documentary evidence, unfortunately, that he was born in Lady Cathcart's house in Ayr, or indeed that it was ever occupied by the McAdam family. More than a few local historians in Ayrshire have searched for such evidence without avail.

The Ayr Bank which collapsed was not that of James McAdam. The collapse occured some years after James McAdam had sold Waterhead and most of his other lands to John Dalrymple of Stair (later 5th Earl of Stair). McAdam did not invest in the ironworks at Muirkirk. McAdam first worked for Dundonald and later acquired the lease of the Earl's tarkilns at Muirkirk. However the principal business of the tarkilns at that time was the production of coke for the Muirkirk Iron Company. His financial difficulties stemmed from the failure of this contract. There were problems on his side with the quality of the coke, and on the MIC side with the demand, which was much less than projected. There are extensive papers concerning this dispute.

There is no evidence that McAdam engaged in any roadbuilding, experimental or otherwise, while in Ayrshire. The extensive records of the roads trustees for the period are completely devoid of any reference to any work by McAdam. The specification given to road builders did not change during the period of McAdam's residency in Ayrshire. His work as a roads trustee was similar to that of his fellow landowners - he wanted roads improved where they affected his interests; in particular the road to Muirkirk.

He was not Deputy Lieutenant of Ayrshire for 15 years - but for 15 months. He was in fact one of 25 Deputy Lieutenants appointed on 6 th February 1797, at a county meeting he did not attend. His affairs were then in disarray, and he had already accepted that he would have to sell his Sauchrie estate to settle his debts with the estate of the late Admiral Keith Stewart. On 15 th May 1798 he began the journey to Falmouth. Although he continued to have an interest in the tar kilns for some years, he was never again resident in Ayrshire.

McAdam suffered a considerable reversal after 15 years of trying to settle
into the mould of an active landowner and industrialist. It is to his credit that
he reinvented himself during the ensuing few years, emerging as the champion
of improved roads and of an economic way of making and maintaining them.

If you choose to put any of the above points on the McAdams website, I only
ask that you cite/blame me as the source. I will stand by them.